The reading will feature Richard Deming and the 2011-2012 Wesleyan Student Poets. 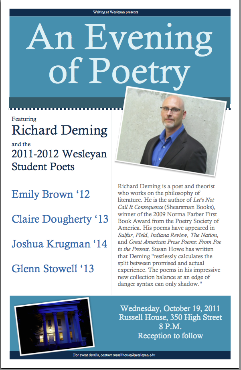 Richard Deming is a poet and theorist who works on the philosophy of literature. He is the author of Let’s Not Call It Consequence (Shearsman Books), winner of the 2009 Norma Farber First Book Award from the Poetry Society of America. His poems have appeared in Sulfur, Field, Indiana Review, The Nation, and Great American Prose Poems: From Poe to the Present. Susan Howe has written that Deming “restlessly calculates the split between promised and actual experience. The poems in his impressive new collection balance at an edge of danger syntax can only shadow.”