Malcolm X: A Life of Reinvention
By Manning Marable

Marable’s Malcolm X is a tremendous project befitting of Malcolm X (or El-Hajj Malik El-Shabazz)’s tremendous impact on this country. The book is the culmination of over ten years of work of conducting interviews and sifting through Malcolm’s diaries. Tragically, Marable did not live to see his creation in print; he passed away just days before the book officially hit shelves earlier this year.

Of the figures who tower over twentieth-century American history, few are as complex, multifaceted, and controversial as Malcolm X. Constantly rewriting his own story, he became a criminal, a minister, a leader, and eventually an icon, all before being felled by assassins’ bullets at the age of thirty-nine.

Manning Marable’s biography of Malcolm is a stunning achievement, the culmination of years of research and dogged pursuit of Malcolm’s friends, enemies, and fellow travelers, many of whom have rarely or never before spoken about him on the record. Filled with startling revelations and new information from long-suppressed private and government files, it presents the most complete picture ever set down of the man Ossie Davis memorialized as “our living, black manhood.”

They also provide the following snippet:

Still bleeding and disoriented, Johnson X Hinton was dumped out into the street outside the city’s felony courthouse. Malcolm’s men subsequently drove him to Harlem’s Sydenham Hospital, where doctors estimated that he had a fifty-fifty chance of surviving. The next day, a crowd of more than four hundred Muslims and Harlemites gathered for a vigil at a small park facing the hospital; NOI members from Boston, Washington, D.C., Baltimore, Hartford, and other cities had driven in to take part. In a private meeting with a delegation of police administrators, Malcolm made the Nation’s position clear: “We do not look for trouble… we do not carry knives or guns. But we are also taught that when one finds something that is worthwhile getting into trouble about, he should be ready to die, then and there, for that particular thing.” As James Hicks observed, “Though they were stern in their protest they were as orderly as a battalion of Marines.”

All three men who had been arrested were subsequently acquitted. Johnson X Hinton and the Muslims filed a successful lawsuit against the NYPD, receiving more than seventy thousand dollars, the largest police brutality judgment that a New York jury had ever awarded. But the incident had also set in motion the forces culminating in Malcolm’s inevitable rupture with the Nation of Islam. Elijah Muhammad could maintain his personal authority only by forcing his followers away from the outside world; Malcolm knew that the Nation’s future growth depended on its being immersed in the black community’s struggles of daily existence. His evangelism had expanded the NOI’s membership, giving it greater impact, but it was also forcing him to address the problems of non-Muslim black Americans in new ways. Eventually, he would have to choose: whether to remain loyal to Elijah Muhammad, or to be “on the side of my people.” (Source)

You’re likely aware that Malcolm X’s life has already been documented in the long-celebrated The Autobiography of Malcolm X: As Told to Alex Haley. Yet the Autobiography does not paint a full or realistic picture, given that Malcolm embellished details and elided others to cast his life in a certain light. Manning’s contribution complements this seminal work by providing new insights and revealing the nuances of this astonishing figure that do not come across in an autobiography. For instance, if you’ve been itching to learn more about Malcolm X’s sex life, this is the book for you (New York Times).

Marable was a well-respected Professor of African-American Studies at Columbia University, where he conducted the research behind the book. In fact, if you’re interested, the website for “The Malcolm X Project at Columbia University” still lives; click over for interviews with Malcolm’s contemporaries, photocopies of government documents that Marable used to construct his narrative, and sound clips of Malcolm speaking. For more on Marable, take a look at this clip from Democracy Now honoring Marable’s death by featuring past interviews with the scholar: 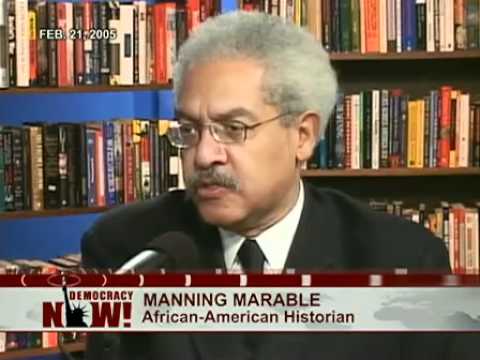 ← NYTimes Best of 2011: The Boy in the Moon
Drop/Add and Email Etiquette →